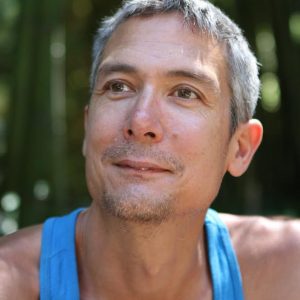 Gingi founded the Shala in London as a dedicated ashtanga yoga centre in 1998. He has been teaching yoga for over 20 years and is one of the UK’s most established ashtanga yoga teachers.

Gingi began studying and teaching martial arts in the 1980s with his father, Sensei Richard Taibong Lee. During an early trip to India, Gingi came into contact with yoga and spent many years returning to India to study and devote himself to the discipline. For two years he apprenticed with the late Derek Ireland, completing a final training course in Goa. He then went to Mysore to continue his studies with Sri Pattabhi Jois and then completed a two-year teacher training course with Graeme Northfield of Australia.

Gingi has hosted many yoga holidays and workshops in the UK and abroad, including combined retreats with John and Lucy Scott, and Kristina Ireland. He continues to run regular workshops and retreats, which often include elements of pranayama, meditation and tai chi. He is a well-respected teacher who has remained at the forefront of the ashtanga yoga community. He has taught, trained and inspired many British ashtanga yoga teachers and has played a key role in popularizing ashtanga yoga in the UK. His teaching is characterised by sensitivity, warmth and a deep commitment to the practice.